Even with an attempt to provide  the most intensive intervention schedule possible, children will almost always spend a greater portion of their time at home with their families than in therapy services.  And although a lot of this time should be “downtime” – children should not be expected to work the 70-hour grind of a high-powered stockbroker – there certainly exists the potential for implementation of therapy objectives and practice in the home environment with parents or caregivers as the agents of intervention.  If parents are able to address therapy goals with their children at home, they can accomplish powerful outcomes – children’s practice related to therapy goals will increase, the child will have the opportunity to generalize use of learned skills outside of the therapy setting, and the use of strategies related to improving communication skills will hopefully have the effect of deepening and enriching the relationship between the parent and child.

Consider this analogy – when a child is leaning to play a musical instrument, they are expected to practice at home to develop their competency.  If they only practiced during their music lessons, it would take a long time for them to bring their skill level to to point where they would be playing an intelligible song, much less occupying the first chair of the London Philharmonic or playing bass in a Journey cover band.  This is akin to the reality of therapy.  Change is certainly possible with direct contact with the therapist as the solitary means of intervention, but the possibility for a faster rate of change as well as increased generalization exists if parents and therapists can work together to implement therapy goals.

There are, of course, many reasons why parents are not always involved in delivering intervention in the natural home environment.  For one, the analogy between therapy and practice of an instrument does not really hold up upon closer inspection, especially in regards to speech-language therapy.  I would not want a parent to send their child to their room to say 100 words with the “th” sound, like you would direct a child to go to their room and close the door so you would not have to hear a squeaky, out-of-tune version of “Ode to Joy” for the hundredth time.  Rather, speech-language therapy objectives almost universally need to be targeted in the context of an interaction, whether in play or in conversation, and this takes time and effort on the part of the parent, and both time and effort might be resources which would be in short supply.  However, the time devoted to practice at home need not be as continuously intensive as in therapy – 5-10 minutes a day would be a fantastic starting point for many families.  Our goal with therapy objectives is not that children replicate these skills only in the therapy environment, but in their home, their school, and their community.  Parents supporting practice in natural environments will help make this goal a reality. 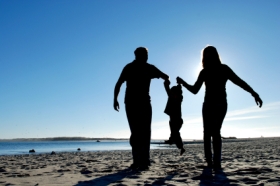 I know that it may seem daunting for a parent to adopt some “work” to do at home  with their child.  However, I think that it is important to realize that when pediatric therapy is done well, it should not seem like work – it is best when progress towards therapy goals is exciting and fun for both the child AND the adult.  The introduction of structure and expectations into play is basically a broad definition of pediatric therapy.  There are almost always methods through which therapy goals can be incorporated into preexisting play routines or activities which parents and children already make a habit of enjoying together.  For example, if a parent and a child have a routine of playing catch, the child could be asked to practice a therapy objective before each throw, whether it is saying a certain sound, balancing on one foot, or writing a sentence.

One of the most effective ways which a parent can become a “surrogate therapist” for their child is for a parent to join a session and be explicitly instructed on ways to incorporate and implement therapy strategies and support.  When a parent joins a session, they have the opportunity to become an active part of the therapy process, and to be coached in the tenants and techniques which result in beneficial outcomes for their children.  Therapists also benefit from the parent’s extensive knowledge of their child’s interests, and their ability to read their child’s emotions.  By making pediatric therapy a partnership between parents, children, and therapists, I believe that the best possible outcomes will be achieved.